The central bank's currency management will be critical over the next few months. A weaker rupee could help to revive exports. But, the currency must fall slowly and in controlled fashion, says Devangshu Datta. 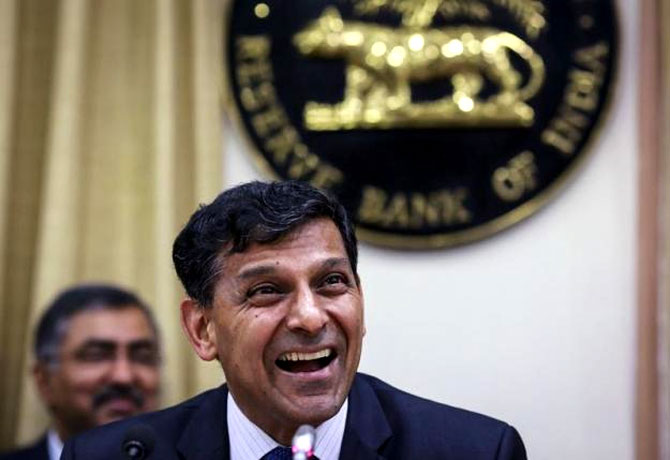 Raghuram Rajan’s last policy review went off without surprises. The central bank opted not to tinker with any rates. The policy review was of interest, however. On the whole, the Reserve Bank of India (RBI) is mildly optimistic: Growth could rise enough to balance off fears of higher inflation.

RBI is not sanguine about global conditions. It sees a slowdown in the US, stress in Europe and downside risks in Japan. The outlook remains fragile in Brazil, Russia and in China, only strong government stimulus is keeping growth afloat.

World trade remains sluggish. On the positive side, currency markets seem to have stabilised, with the yen rising, and downwards pressure only hitting the pound. Commodity prices remain weak in general on weak demand.

Seen in isolation, the outlook for the Indian economy has improved. The monsoon has delivered with a boost to agriculture. Industrial production has picked up with one specific item, "insulated rubber cables" being responsible for uneven IIP.

But, imports continued to decline, albeit at a slower pace. The domestic demand for gold remained muted, with domestic gold prices at a discount to international prices.

Non-oil non-gold imports continued to shrink, pulled down by coal, fertilisers, ores, iron and steel and machinery and transport equipment. Foreign direct investment inflows slowed in April, May 2016, but net portfolio flows were stronger after Brexit. Reserves are at a record $365.7 billion.

The central bank's conclusions are that inflation could rise further though earlier projections are maintained. Growth should also rise, and the projection of 7.6 per cent Gross Value Added is also retained.

RBI doesn't normally comment on equity valuations and it remains silent on that count. This is definitely one area of concern. At an index PE of 23- plus, potential growth has already been largely discounted.

The central bank's currency management will be critical over the next few months. The rupee has actually strengthened uncomfortably, especially against the yuan. A weaker rupee could help to revive exports. But, the currency must fall slowly and in controlled fashion, without volatility.

Given the need to reverse $34 billion of swaps in the September-December 2016 period, there is a chance of a lot of volatility. Traders will be watching the swap-unwinding process carefully. Apart from that, the banking issues could cause large worries. The level of required recapitalisation for public sector bank (PSB) will amount to 8x or even 10x of the current commitment by the government of India.

Also, the owner of the banks, meaning the government, has to put better systems in place to ensure that the situation does not recur at regular intervals. RBI will have to push for a process of internal reform in PSBs and in the absence of Rajan, it may lack the determination to do so in the face of political reluctance.