Regulating the internet only as a medium is somewhat similar to regulating electricity only as a driver of the TV industry, says Ajit Balakrishnan. 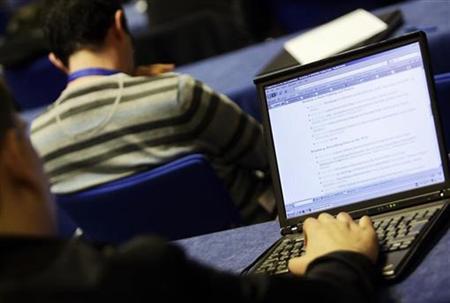 It is a source of unending fascination for me that when the internet, and the World Wide Web, found its first commercial, revenue-generating opportunity it was as a medium.

Early players -- portals, as they were called -- made their living by putting useful and interesting information on their websites, offered it free for use and tried to make ends meet by charging advertisers for displaying their ads on these websites much as a newspaper, a magazine, a radio station or a TV channel did.

This kind of business model for the internet has become so prevalent that it is hard to imagine that it could have been any other way.

But it could have been many other ways quite easily.

Take the case of that other great world-changing invention, steam.

It was first commercially deployed in the early 18th century in British coal mines then to power locomotives (that incidentally created a stock-market bubble that historians call "rail-mania", which bears a strong resemblance to the dot-com frenzy of 2000) and then to power ships.

Its use in media had to wait till Benjamin Day used a steam-powered rotogravure printing press, dropped the price of his New York Sun newspaper to a penny a copy and outsold all other rivals to give birth to the "penny press" as the first true mass medium. But we do not conflate the steam engine with the newspaper.

Or take the case of electricity. When it first appeared its major use was to replace steam and gas in factories; then, it was used for home and street lighting.

When Marconi opened his first radio-manufacturing factory in 1898 in Chelmsford, England, the early big use for his radios was ship-to-shore communication. (The sinking of the Titanic in 1912 helped hasten legislation to make radio mandatory for ocean-going ships.)

Radio stations that broadcast news and shows did not appear till 1920, when Westinghouse opened a commercial radio station in Pittsburgh.

Similarly, the first commercial TV station was opened by General Electric as late as 1928.

But we do not conflate electricity and its technology with TV.

Steam engines made the transportation of goods and people cheaper, and opened national and international markets.

Electric power made factories more efficient and extended the productive working day by proving to be a reasonably priced illumination system. Radio as a ship-to-shore communication system reduced the risk of ocean transportation.

Each of these technologies contributed to societal productivity improvement in many different ways before it came to play any significant role in the media industries.

The common thread across all these technological innovations is that they made it possible for humans to accomplish more with less effort, increasing the rate of output per unit of input -- what economists define as "productivity".

That's also the true promise of the internet and the World Wide Web. I believe that we would have seen a lot more of the internet in that role if it had not got so quickly to be part of the media industry.

Its early success as a medium, battling with print, TV, radio and cinema, I believe, distracted it from its true mission of improving societal productivity.

Take, for example, the ATM, which lets us get cash in a mere minute versus the earlier system of going to a bank branch and waiting interminably.

We, as a bank's customers, save time; the bank saves investment in expensive real estate to extend their branch network, and can both save time and money.

It is a sign of the times that ICICI Bank recently announced that almost 85 per cent of its transactions were online and only 15 per cent were done at branches.

The "factory" was the way industrial society improved its productivity by concentrating machinery and people in one location.

With the factory came ways to reduce wastage of material, mastering of more consistent quality and so on.

In the internet era, it is the "website" that is the equivalent of the factory of the industrial era.

The website is the location where the "machine" of the information age, the algorithm, does the productivity-enhancing tasks transforming raw data to useful information.

Just as the factory needed special legislation to give it a protection under law to fulfill its societal role, websites, in most countries, are allowed to function by laws that define their role as "information intermediaries": as productivity enhancers.

This is where problems begin.

Phrases like "freedom of expression", which are central in a media discourse, are often brought into play in these arguments.

The internet is just beginning to play its real role in the emerging Internet of Things of enhancing productivity throughout society, and attempts to regulate its key mechanism, the information intermediary, needs that larger vision.

Ajit Balakrishnan, founder and CEO of Rediff.com, is the author of The Wave Rider, A Chronicle of the Information Age. ajitb@rediffmail.com