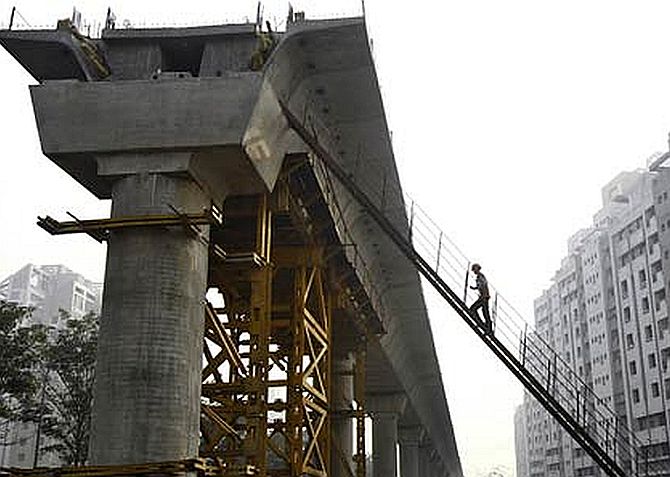 Good news appears to be greeting the Union finance ministry on many fronts. Indirect tax collections in the April-June period of 2015-16 have risen by over 37 per cent, much higher than the 19 per cent growth target set by the Union Budget for the current financial year.

Indirect tax growth of this order has not been seen for the last several years. In 2014-15, for instance indirect tax collections grew by only nine per cent over the previous year.

It is no doubt a good beginning, but the sharp rise is a bit of a puzzle since industrial growth figures are still quite depressed and provide no basis for such a rise in indirect tax revenue collections.

Take the government's non-tax revenues in the first two months of the current financial year.

But in April-May 2015-16, non-tax revenues more than trebled over the same months of the previous year.

Most likely telecom spectrum auction revenues held in March this year must have helped the government's non-tax revenues as part of the proceeds must have come in to the exchequer only in April or May.

But with more auctions slated in the latter half of the year, non-tax revenues too should grow at a much higher rate than has been budgeted.

International commodity prices continue to remain depressed. Lower oil prices mean reduced financial burden that the government has to bear on account of subsidies for petroleum products and fertilisers.

Gold prices too have fallen making imports of the yellow metal more manageable from the balance of payments point of view.

Indeed, finance ministry officials note that the government is hoping to build a savings cushion of around Rs 1 lakh crore or Rs 1 trillion on account of lower commodity prices.

So, the current year may well end with a fiscal deficit well below the Budget target of 3.9 per cent of gross domestic product (GDP).

The current account deficit should stay under control at well below two per cent of GDP, compared to 4.8 per cent a couple of years ago.

Even economic growth may be around seven per cent or a little more, according to some official estimates.

However, civil servants in some economic ministries are not too excited by these apparently positive developments on the economic front.

They recall from past experience that whenever the broad numbers on the economy look good, the government loses the drive and urgency to reform and fix policy problems to improve growth on a sustainable basis.

It is only when economic crisis hits the government hard that the political leadership gets down to the tasks of pushing ahead with difficult reforms.

Even the Opposition political leaders take it easy and create meaningless hurdles to much-need policy action, when they sense that the broad economic numbers are sending no alarm signals.

Thus, as long as the broad economic numbers look good, there is little hope that the government can or will be allowed by the Opposition political parties to undertake reforms like the introduction of the much-delayed goods and services tax regime or tackling the growing non-performing assets problems of public sector banks, not with palliatives but with tough measures like restructuring their ownership.

Forget privatisation or strategic sale of government equity in select public sector undertakings or PSUs, even the target of disinvestment set for this year may not be met.

The Budget had set an ambitious target of disinvestment proceeds of around Rs 41,000 crore (Rs 410 billion) this year.

Although an in-principle decision has been taken to identify a few PSUs and disinvest the government's equity in them, not much action has been seen so far on the ground.

The Indian stock markets may turn bearish after the US Fed decides to raise interest rates.

That could trigger a postponement of the decision to sell equity in the identified PSUs.

This would once again see the bunching of a large number of PSUs for disinvestment in the final three months of the financial year, undermining prospects of a fair price discovery.

Last year, there was pressure to go through the sale because the government needed that money to bridge the fiscal deficit.

This year, even that pressure would not be there, thanks to a better fiscal situation.