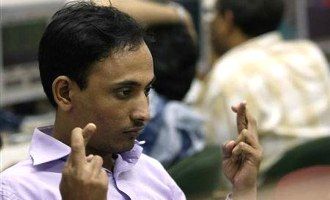 India’s equity indices are up almost 25 per cent in 2014 so far, including the nearly 10 per cent gain since Narendra Modi took charge as prime minister in May this year.

The problem is that fundamentals are yet to catch up.

This rally is largely being driven by hopes that the Modi government will drive economic growth higher, and, thus, increase earnings growth for companies.

Thus, questions about the sustainability of this market are valid -- given geopolitical risks, as well as the uncertainty over liquidity withdrawal and possible rate tightening by the United States Federal Reserve in 2015.

At the moment, the price of Brent crude oil has fallen to around $100 a barrel, helping the import bill, trade deficit, oil subsidies and inflation.

The monsoons may still be sub-par, but vegetable prices seem firm, and it is unclear what the effect will be on demand.

On some occasions, India has managed reasonably well during sub-par monsoons.

Meanwhile, the Reserve Bank of India will consider its inflation-fighting to be showing results, and, thus, will likely stay the course.

and fixed deposit rates are higher than eight per cent.

This might encourage people to move away from real estate and gold. Higher saving might also help investment, and provide an impetus to the private sector.

Certainly, the confidence level in India Inc is higher than it was last year.

These expectations have fuelled hopes for the broader market: in the past decade, it has been seen that market returns are usually weak to negative when Sensex earnings growth tapers to single digits, and price-to-earnings multiples fall below the long-term average.

If the market is right about projected earnings -- which is never certain -- then stocks are not really that expensive by historical standards.

Interest rates may have peaked; inflation will hopefully inch lower; and, if earnings growth also picks up, then the market is in a comfortable position.

However, this optimistic assessment depends crucially on hopeful earning projections.

Many risks remain, external as well as internal -- especially the high expectations from the government.

If earnings do not perform as expected, and confidence in the new government collapses, a sharp correction might be on the cards.
BS Bureau in New Delhi
Source: