India's banks on the cusp of a revolution? Wait and watch

If things play out the way the regulator, the Reserve Bank of India, has planned, the country will go a long way in taking banking to the majority of Indians who still remain outside its fold, says Subir Roy. 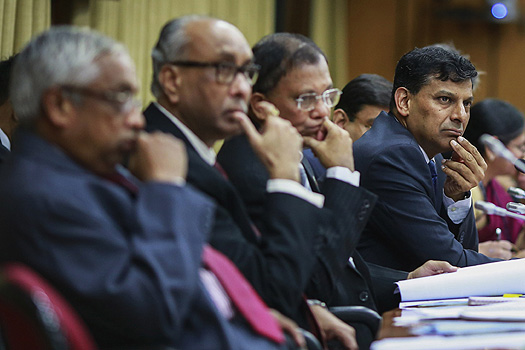 RBI Governor Raghuram Rajan and other officials listen to a question during a news conference after the bi-monthly monetary policy review in Mumbai. Photograph: Reuters

What has happened in the last few weeks, and what will follow as a consequence, will bring about a major change in the Indian banking scene - a change which has the potential to be as big as bank nationalisation.

If things play out the way the regulator, the Reserve Bank of India, has planned, the country will go a long way in taking banking to the majority of Indians who still remain outside its fold.

The revolution which began in 1969 and played a major role in taking up the national savings rate, thus enabling the post-liberalisation high growth phase, had stalled in terms of outreach.

The issue of payments bank licences to as many as 11 entities will change the face of the remittance business in the country.

The key new enabler is information technology and, as many of the licencees are companies with deep pockets, funding the IT rollout will not be an issue.

It is possible to visualise poor people soon being able to instantly remit small amounts from one remote corner of the country to another, so long as the area can support a simple mobile phone to receive a one-time password.

Business correspondents and local kirana shops with hand-held devices should eventually be able to handle the cash-in and cash-out; but the big challenge will be keeping remittance charges low while leaving enough in the hands of the payments banks to enable them to make the job worthwhile for the business correspondents.

The new banks will make little money, but can be expected to aggressively chase market share nevertheless in the hope that the best performers will later get the chance to become full-fledged banks.

The first step to an even bigger change will come in a month or so with the issuing of licences for small finance banks.

These will not only be able to accept deposits, as the payments banks can, but will also be able to lend - although 75 per cent of the lending must be to the priority sector.

The big gap that remains in credit being available to small and medium enterprises, as also tiny entrepreneurs in lightly banked semi-urban and rural areas, will start to get addressed by these banks once they get going.

(The microfinance institutions have till now been able to only scratch the surface.) Not only will their USP be local knowledge and inclination to live and work in that environment, something which the large public sector banks have failed to do, but they will know that this is where they will have to strike roots and prosper.

This will have an enormous impact on grassroots economic activity and job creation. Meanwhile, public sector banks (PSBs), which are in the vortex of this climate of change, are getting confusing signals.

A cultural shock of sorts was administered to them recently, when some appointments to the posts of managing director and chairman in a couple of them were made from the private sector.

So great has been the destabilising impact that the government has subsequently made an announcement the vacant posts in other PSBs will be filled from within.

But within days of the top level appointments, the prime minister, in his Independence Day speech, spoke in terms of each bank branch in the country (they total 125,000) financing two sets of start-ups - one run by a tribal or Dalit entrepreneur and another by a woman.

Now this sits poorly alongside the move to professionalise PSB managements.

Guidance that such start-ups need to be encouraged should have been enough. To lay down targets in terms of numbers is to signal a return to the days of politically directed lending.

Will the government bear the loss that can result from seeking to fulfil this target as a result of a start-up failing, as most start-ups do?

Are the banks being fully compensated for the loss they are incurring from opening all those Jan Dhan Yojana accounts which have hardly any balances and witness few transactions - but carry insurance products? PSBs, despite the confusion, are not sitting idle.

Some have tied up with payments firms to fight the payments banks. Many of them have also started aggressively lending to small businesses in which they will have a chance to undercut (in terms of lending rate) both a new bank like the former microfinance organisation Bandhan and the small banks which are coming because of their (PSBs') huge deposit base and low cost of deposits.

So overall, a lot is happening - absolutely no one is sitting idle doing nothing.

It all adds up to a strong positive for the poor, mostly in villages, who have been too intimidated till now to go into a bank branch manned by babus from cities and ask to become a customer.