Economy recovering? Govt has a tough task ahead

The Analysis estimates that there will be a shortfall of over Rs 1 lakh crore (Rs 1 trillion) compared to the Budget projections. The Mid-Year Economic Analysis, prepared by the finance ministry, was tabled in Parliament last week.

Part of the sequence of formal disclosures by the executive to the legislature, much of the assessment of the state of the economy confirms what analysts have been saying over the past few weeks.

The economy is recovering, as a consequence of both favourable external developments and actions taken by the government.

The Analysis lists a number of steps taken by the government that have contributed to both positive short-term outcomes, such as lower food inflation, and the capacity for more equitable growth, through financial inclusion.

However, its most important contribution is its assessment of the fiscal situation, which highlights the fundamental dilemma that the government is facing on this front and the risks that it poses to the growth prospects of the economy.

On the revenue side of the equation, the Analysis estimates that there will be a shortfall of over Rs 1 lakh crore (Rs 1 trillion) compared to the Budget projections.

Aggregate revenue has been growing at about 10 percentage points below the Budget numbers, despite the fact that growth of gross domestic product, or GDP, has been showing some signs of recovery.

With this kind of shortfall, the assurance that the deficit target will still be met may appear somewhat naive.

It is obviously going to put an enormous amount of pressure on the government to both cut expenditure in the remaining months of the fiscal year and aim for high realisations from disinvestment in a somewhat unstable global financial environment.

If the short-term challenges don't seem daunting enough, the Analysis takes a strong position on the issue of reviving the stalled momentum in infrastructure.

It virtually admits that the public-private-partnership model is now defunct.

The only way to get infrastructure going again is through expanding public investment.

This is, in fact, an inevitable conclusion emerging from the financial condition of major promoters and the burden that incomplete projects are imposing on the financial system.

Without at least some of these projects being completed, there is little prospect of growth breaking out of the current range, and this is not going to happen unless the entire financial framework is changed.

In a nutshell, the short-term and long-term pressures and compulsions have put the finance ministry in a 'damned if you do, damned if you don't' situation.

If the deficit commitments are to be met, expenditure must be sharply reined in.

If the growth priorities have to be facilitated, expenditure must be sharply increased.

Finding a viable balance between these contradictory elements is clearly the challenge that the finance ministry has to rise up to in the Budget for 2015-16. 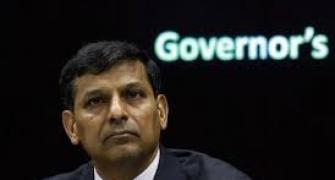