As harbingers of agricultural distress become visible, rest of India can turn to Gujarat for answers on how to address it, rues Rahul Jacob 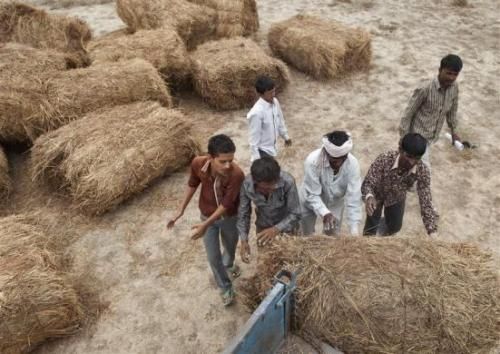 A bumper potato crop in Gujarat coupled with oversupply in international markets prompted a crash in prices earlier this year, to as little as Rs 4 a kg.

The state government intervened, providing extra cold storage to house the surplus and subsidies to enable the farmers to ship their bumper crop to other states where prices were higher.

The agrarian crisis unfolding in parts of India must be met with similarly speedy responses across the country if it is not to get worse.

There has been a rush to opine that the solution is to move farmers out of their Steinbeckian misery to higher-productivity factory jobs.

This is about as original as arguing that if you want to see the dawn, you must look east early in the morning.

Of course, millions of farmers must make that transition -- but the question is, how quickly can industry and the services sector create jobs to absorb them, and how quickly can they be trained for such jobs?

The rational answer must be that it will take a couple of decades -- if it happens at all.

In the meantime, the state and the Centre must invest in making agriculture more efficient in the way it uses water, seeds and fertilisers and in building storage chains even as India faces the trap of too many people trying to grow not enough food with too little land with ever more scarce water supplies.

Writing in The Indian Express, the noted agricultural economist Ashok Gulati puts the problem forcefully, “Policymakers have to answer this crucial question: Is it acceptable to have an overall GDP growth of seven to nine per cent with less than two per cent growth in agriculture?”

How we respond to that question and how we make up for lost decades in transitioning to labour-intensive manufacturing will determine whether this country ends up a basket-case, or makes the arduous journey to levels of even moderate prosperity.

The good news in agriculture is that Gujarat and even Rajasthan show it can be done. These two states succeeded in the first decade of the 21st century in raising agricultural growth annually by 9.8 and 9.6 per cent, respectively.

The bumper dividend of the Narmada waters notwithstanding, the success in Gujarat’s agriculture has, in fact, been more notable than its success in manufacturing.

Dilip Patel, who runs oil mills and yarn producing factories in Mehsana, ticks off a few of the government’s initiatives: building small canals to deliver water to farmers’ fields; the dispersal of farming knowledge as well as subsidies for better seeds and fertilisers through events like Krishi Mahotsav; the use of Bt cotton; and the recent push on drip irrigation.

Thriving rural cooperatives and excellent roads that extend into rural areas as well as a regular supply of electricity complete the picture.

The problem of the average landholding being just 1.15 hectares makes the challenge almost insurmountable, but with half the population dependent on agriculture, governments are going to have to try much harder to, say, introduce drought-resistant crops as water scarcity becomes ever more acute and reform our agricultural marketing mechanisms.

The country also needs to redouble its efforts to improve the adoption of crop insurance -- only about five per cent of wheat farmers had insurance in 2012.

Recent reports in this paper and other business dailies show that farmers not only tend not to know about crop insurance, but that the system for rural finance (both for loans and insurance) is stacked against them.

Loans in many cases require bribes, while those with insurance have found settling claims after the unpredictable weather of the past few months has been riddled with definitional issues or the classic bureaucratic runaround at which our government institutions are undisputed world champions.

As Mr Gulati points out, instead of waiting for months for often corrupt village patwaris to pronounce on the extent of a farmer’s crop losses, living in the 21st century affords us the opportunity to use satellite imagery to quickly approximate those losses.

Now, that would be a life-affirming definition of financial inclusion.

Along with such carrots, state governments need to do better at halting the profligate misuse of water that has been widespread across so many of our farms.

Gujarat instituted a ban, recently relaxed, on new borewells in the northern part of the state in 2004.

India’s water crisis gets worse with every year; fresh water per capita availability has declined from 3,000 cubic meters to 1,123 cubic meters over the past half a century, according to a recent charticle in Mint.

Water riots are likely to be tomorrow’s news story with the sickening regularity that farmer suicides are today’s -- and we will have those as well.

We have to give our farmers a better chance to avoid the lives of despair so many endure while recognising that even well-irrigated plots generally cannot feed their families because the average holdings are so small.

On some crops, India’s agricultural productivity lags not only Southeast Asia but also Ethiopia.

All of which does, in fact, point to the need to simultaneously create conditions for labour-intensive industries like clothing, toys and footwear to choose India over Bangladesh and Cambodia as they continue to exit China -- instead of losing out to these countries.

This government needs to embed more technocrats -- from agri-economists, to experts on generating employment in low-skilled services and manufacturing, to Indian businessmen operating in China who have built labour-intensive manufacturing businesses outside India.

The recurrent farmer suicides suggest we are early in a narrative that promises many more tragic endings.

The generalists in the Indian Administrative Services and our easily distracted political class urgently need all the help they can get.

Image: Farmers load fodder supplied by the government for their cattle at Sami village in Gujarat. Photograph: Ahmad Masood/Reuters