In our previous article, Shaelja Sharma and I made a simple point; viz, that Gujarat has been, and hopefully will always continue to be, one of the faster growing states in India. To portray Gujarat's faster growth solely as a recent achievement owed to Chief Minister Narendra Modi is simply a "poopganda" ploy by Modi bhakts not supported by statistical data on growth rates.

We drew our conclusions from what data was at hand. Since then, we have been able to collect more detailed data on annual growth rates  and have regrouped and tabulated the same to cover the periods 10 years before economic reforms, 10 years after economic reforms but before Modi, and 10 years that Modi has been the chief minister of Gujarat.

We have taken the same peer states as before, adding only West Bengal to the kitty to provide a perspective on how politics impacts growth. And we have uniformly used Compound Annual Growth Rate over 10 years to make the comparisons. Modi assumed charge of Gujarat in October 2001. So his first full year in office spans data for the year April 2002 to March 2003.

The data from our spreadsheet is summarised below for easy reference:

After economic reforms, Gujarat doubled its growth rate from 3.67 per cent to 7.41 pc. Most other states saw a more modest step-up in growth rates immediately after reforms. But they continue to accelerate their growth rate at a modest pace and will hopefully catch up with the leader.

After Modi took charge as CM, Gujarat's growth rate picked up from 7.41 pc to 10.28 pc, a step-up of about 40 pc. In the same period, Maharashtra, which has a GSDP that is 2.5 times greater than that of Gujarat, was able to step up its growth rate from 6.39 pc to 9.90 pc; that is to say by 55 pc, narrowing the gap with Gujarat. Most other states did just as well except Bengal. West Bengal was placed ahead of its peers before reforms, made modest progress immediately after reforms, but has stagnated since then, falling behind its peers.

For perspective, we added the CAGR for all the above states as per actual data with the Planning Commission for the years 2006-07 through to 2010-11 in the fourth column above. Over the last five years, Andhra and Tamil Nadu have more or less equaled Gujarat's performance, while Maharashtra, despite a much higher GSDP base [2.5 times], has actually raced ahead at 10.34 pc to Gujarat's 9.34 pc. Bengal continues to stagnate though it too shows a modest improvement.

Given the above story, narrated in hard numbers, it is clear that, [a] the big step-up in growth rates, across all states including Gujarat, came AFTER economic reforms and cannot be attributed to any particular individual chief minister, be it Modi or anybody else. And [b], in the decade that Modi has been CM, Gujarat has done well but so have other states. In fact, some have closed the gap with Gujarat, particularly in the last  five years. Maharashtra now ranks as the fastest growing state, well ahead of Gujarat.

So does politics make no difference to growth rates of the states? We have tried to provide clues to the answer to that question at two levels. First, the data pertaining to Bengal clearly shows that its economy was doing pretty okay in a rent-based economy that prevailed before reforms. Its growth has picked up after reforms but at a much slower pace because of the then ruling Communist Party of India-Marxist's antipathy towards reforms.

At another level, we have examined the above state GSDP figures in light of the nearly six years of National Democratic Alliance rule at the Centre, spanning the period 1998-99 to 2003-04. The data is summarised here.

A cursory glance at the above figures shows that the growth rate of GSDP of all large states took a rather pronounced dip during the six years of NDA rule at the Centre. Depending on your politics, you can read anything you like into the data but the salient fact is NDA took a reforms holiday while talking a lot about them. They actually rolled back petroleum sector reforms as crude prices took off in 1999-2000 from $15 to $40. No government has been able to fill the gap in price pass through since then. Our takeaway from the data is that the reforms process at the Centre matters more for growth rates than any particular government or chief minister at the state level.

Taking these two sets of data together, it is safe to say that if Modi is being hailed as India's future savior by some quarters, it is for reasons other than his role in fostering Gujarat's economic growth. At best he has simply maintained Gujarat's performance in relation to its peer states to put it mildly. And Gujarat's "high starting base" is irrelevant to the argument. Maharashtra has a GSDP 2.5 times the size of Gujarat and is well ahead of Gujarat's growth rate over the last five years.

As promised earlier, we will return to this debate as we gather more data and assemble them into useful information. Our intention is not to run down Gujarat -- may it prosper always -- but to show that Gujarat's growth story owes little to Modi and more to its people. Instead it is being used to promote a fascist ideology as if the two, Hindutva and Modi, are a necessary condition for superior economic performance of the sort seen in Gujarat. That is a spurious argument not grounded in fact. Maharashtra's growth story, equal if not better than Gujarat's, shows neither fascism nor a cult figure like Modi is necessary for superior economic performance.

All other states are catching up with Gujarat and hopefully the trend will continue. West Bengal is a grim reminder that you must reform or stagnate.

Last but not the least, if India is looking to Modi as its next PM, we must examine his ideas about economic reforms [as distinct from his executive ability], and his track record in implementing them. If there is one salient fact to take away from the above data, it is that economic reforms, or the absence thereof, affects growth more than anything else.

The current reform holiday by UPA2, and the fall in growth rate that has followed, is a stark reminder of the salience of economic reforms. What are Modi's ideas about economic reforms? Has he promoted them? Or has he expanded "Big Government" in Gujarat over the last 10 years? We will return to that question with more facts and figures.
Sonali Ranade and Shaelja Sharma
Related News: Gujarat, Narendra Modi, National Democratic Alliance, Bengal, GSDP
Print this article
The real reason why Narendra Modi's supporters want him as PM 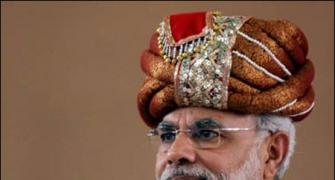 The hype over Gujarat's economic performance
'Would Modi return to power in his own state?'