'Is the worst behind IDBI Bank? Can its managing director and CEO, State Bank of India-bred Rakesh Sharma, who has also headed Canara Bank, turn it around?' asks Tamal Bandyopadhyay. 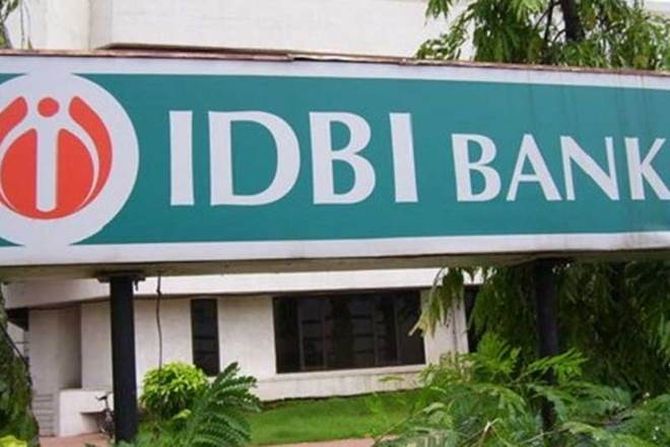 IDBI Bank Ltd, quarantined in the correctional facility of the Reserve Bank of India (RBI) which restricts its ability to lend, is about to start corporate lending in a limited way to its existing customers with high credit ratings.

Till now, its ability to lend is capped at Rs 5 crore per customer.

From December 2015 when all Indian banks were forced to clean up their balance sheets till June 2019, it has made losses every quarter barring two -- overall a record Rs 35,977 crore in the past 18 quarters.

Is IDBI Bank turning out to be the classic milk pitcher or inexhaustible bottle of magicians, pouring net losses every quarter?

To keep it floating, since fiscal year 2016, the government and the bank’s new majority owner Life Insurance Corp of India (LIC) together have pumped in Rs 48,765 crore (including Rs 9,300 crore committed during the current year by the government).

Is the worst behind the bank?

Can its managing director and CEO, State Bank of India-bred Rakesh Sharma, who has also headed Canara Bank, turn it around?

Going by the numbers, all is not lost for IDBI Bank.

As the government doesn’t hold a majority stake (47 per cent), it is a private bank and yet, for regulatory purposes, it is a public sector bank.

LIC, which holds 51 per cent stake, needs to bring it down to 40 per cent over the next 10 years and it will continue to supply capital for the next five years.

The bank’s gross non-performing assets (NPAs) as well as net NPAs as a percentage of total loan assets dropped in June.

This is a good omen, particularly when the overall asset book is shrinking.

Its advance portfolio shrank from Rs 2.3 trillion to Rs 1.7 trillion in the past three years.

When loan assets grow, in percentage terms, NPAs shrink to create an optical illusion even if there is less recovery or more loans going bad.

Its 88 per cent provision coverage ratio is higher than most banks.

It is also shedding corporate loans.

Around 51 per cent of its loan book is now retail, including loans given to small enterprises.

This, combined with a drop in the deposit cost, has led to a rise in the net interest margin -- from 1.7 per cent to 2.03 per cent.

Historically, IDBI Bank’s inability to lend to retail borrowers, particularly in the so-called priority sector (40 per cent of a bank’s loans mandatorily flow there), has cost it dear.

It has been keeping at least Rs 21,000 crore in infrastructure bonds as a penalty of non-fulfilling priority sector lending norms, earning 4.15 per cent, much lower than the cost of the deposits.

It will start releasing the money in phases and give loans to earn more.

The RBI restriction on fresh loans has had a spiral effect as the good loan accounts started leaving the bank and with the balance sheet shrinking, its earnings were affected.

Focussing on retail loans (out of Rs 54,000 crore pure retail loans, 75 per cent are home loans), Sharma is trying to stem the rot.

Only 1.3 per cent retail loans are bad.

After using Rs 11,000 crore for provisions, an equivalent amount can add to its bottom line over the next few quarters.

In the best case scenario, it can recover 35 per cent of the bad loans spread over infrastructure, power, steel, oil refineries.

The bank has moved the recovery tribunal for Rs 65,000 crore of bad assets, of which cases involving Rs 38,000 crore have been admitted.

In June, it added Rs 3,400 crore fresh bad assets but a bulk of it is technical in nature and the bank could classify Rs 2,200 crore of it as performing assets by next March.

Sharma is doing his bit by setting up a data analytics department, hiring treasury and technology heads from smart private banks and recruiting staff from B-school campuses.

It is also on track in getting rid of the non-core assets -- its stakes in asset management and insurance companies, a stock exchange etc, besides real estate and other fixed assets.

It has already generated Rs 3,400 crore through this route and another Rs 1,500 crore is on the table.

LIC may have done an act of charity by picking up the ownership of IDBI Bank under government pressure but if the synergies between the bank and India’s largest life insurance company are exploited well, IDBI Bank can bounce back.

A task force, formed to explore the synergies, has charted out a 100-point action plan, focusing primarily on cross-sale of products.

While policy premiums can be collected at 1,891 bank branches (giving the bank float money), 1.1 million LIC agents can source business for the bank -- both loans and deposits.

It has started offering home loans to policy holders, which is 0.10 per cent cheaper than other customers.

IDBI Bank will post net loss in the September quarter and probably even in the December quarter but it can come out of the woods.

From a milk pitcher magician, Sharma needs to act as Harry Houdini who escaped from a packing crate weighed down by 200 pounds of lead in New York’s East River in less than a minute.

No one will grudge Sharma a few more quarters to pull out IDBI Bank, buried deep under the burden of bad loans and the culture of a development institution.