Market indices are down; the rupee could lose further against the dollar. Yet India's growth has been reasonable and its fundamentals appear okay, says Devangshu Datta.

The China Syndrome was one reason for bearishness. But there were several India-specific reasons as well: The monsoon has been below-par, first quarter growth has been slow, the ruling Bharatiya Janata Party (BJP) is struggling with new political challenges, and legislative reform appears to be off the table.

It is the last factor which is perhaps, the most worrying. If legislative changes are impossible, the potential for growth via reform is drastically reduced.

Some 15 months after the BJP won a historic mandate, the Opposition has successfully blocked all legislation in the Rajya Sabha.

The government has backtracked on amendments to the land acquisition law; the goods and services tax Bill is stuck indefinitely; the strike last week demonstrated the clout of trade unions opposed to changes in labour laws.

Other legislation is required (such as amendments to the Electricity Act) and it might all get stuck.

A larger BJP presence in the Rajya Sabha would be of substantial help and in that context, Bihar Assembly elections are crucial.

The Patidar agitation in Gujarat has been embarrassing for the BJP.

The government is also struggling to fulfil its assurances to defence personnel of one rank one pension. One way or another, that has big financial and political implications.

The new series claims GDP grew at seven per cent between April and June 2015, while gross value added (GVA) grew at 7.1 per cent.

The formula holds GDP equal to GVA plus indirect taxes minus subsidies. Since indirect tax collections grew at an excellent 37.5 per cent in Q1 and subsidies should have fallen due to cheaper crude and gas, it is odd that GDP is less than GVA.

Either way, GDP is growing slower than hoped-for. Rainfall is running 13 per cent below normal and that has prompted many downgrades of estimates. 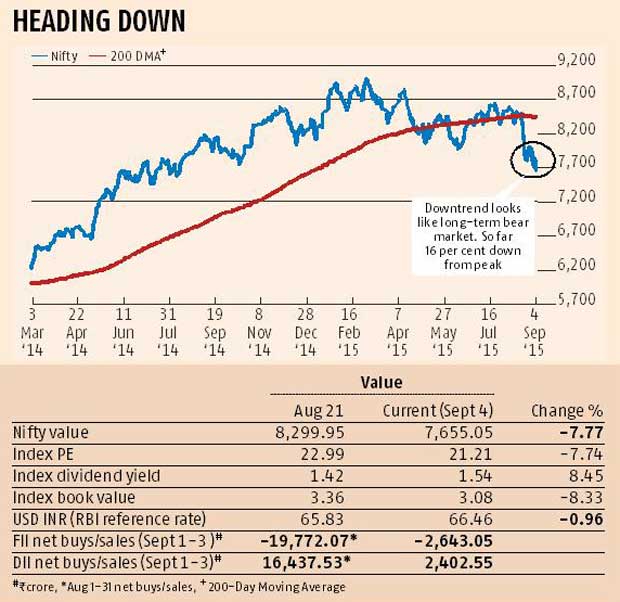 BofA-ML estimates that GDP growth may ease by 0.3 per cent in 2015-16. Morgan Stanley has cut its forecast to 7.5 per cent from an earlier estimate of 7.9 per cent.

Moody's has cut estimates to seven per cent for 2015-16 from the previous forecast of 7.5 per cent.

Slowing corporate earnings - growth in the Nifty Earnings Per Share has been negative year-on-year for three quarters - have led to reduced valuations.

There is talk of a drop to PE 17. Global sentiment revolves around two factors.

One is the ability of the Chinese government to control the narrative building around the world's second-largest economy.

There has been a slowdown. The equity bubble has burst. The yuan has been devalued. The PRC's reserves have eroded by $340 billion.

But China is still growing at a reasonable clip by objective standards. The Chinese leadership must find ways to emphasise the positive aspects of that story.

The second big factor is the attitude of the US Federal Reserve. Will the Fed raise the USD policy rate at the mid-month meeting of the Federal Open Markets Committee?

Most traders are betting that it will not raise. One never knows. There were some hawkish noises at the recent Jackson's Hole conclave.

But Mario Draghi has reiterated that the European Central Bank will do "whatever it takes", probably meaning more Quantitative Expansion.

All this guarantees higher volatility in forex markets.

The sense in India is that Reserve Bank of India (RBI) Governor Raghuram Rajan's response will be calibrated to the Fed's actions or inaction.

In the long-term, the RBI will cut rates but it may tinker with timing.

The rupee has fallen but it will need to lose more ground versus the US dollar just to keep exports competitive and protect domestic industry against dirt-cheap imports.

Every east Asian currency will see devaluation now that the Chinese have set the agenda.

The rupee has to dip further. There are positives for India in this scenario.

Growth is reasonable even if it's less than hoped-for. India has reasonably good fundamentals in terms of a low current account deficit, an improving fiscal deficit, and not too much overseas debt.

Low commodity prices are a big relief, ensuring headline inflation and subsidies will not spiral out of control even if food prices rise.

The exit of FII money has been almost matched by large commitments from domestic institutional investors. It is apparent from the rise in assets under management that Indian households are investing a larger share of their savings in financial assets.

The government looks set to forge ahead with its disinvestment programme, despite the current volatility.

It has also front-loaded some public expenditure, which could help stimulate economic activity. However, technically speaking, every indicator suggests a new long-term bear market.

Prices have dropped off a cliff.

The last bull market lasted 40 months, with the Nifty climbing off a bottom at 4,531 in December 2011. The ongoing correction could be deep, and it could take a long time to play out. Markets to remain volatile as China returns from holidays