Issues such as the economy's health and the government's ability to produce an environment where jobs are available are not of particular concern to us as voters, asserts Aakar Patel. 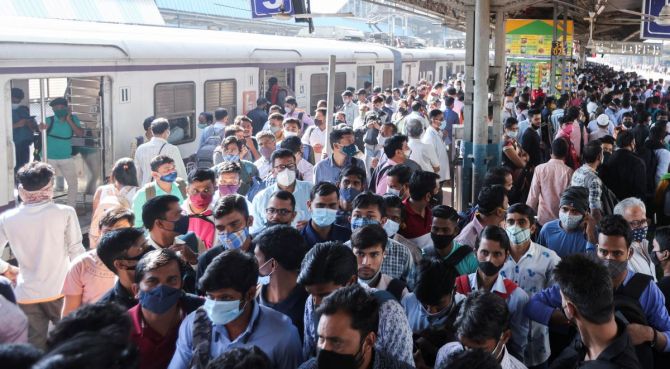 IMAGE: Commuters disembark from a train at a railway station in Mumbai, February 1, 2022. Kindly note the image has been posted only for representational purposes. Photograph: Francis Mascarenhas/Reuters

Another Budget has come and gone and for a couple of days we have seen and read what people have to say about the economy.

Much of this is limited to two things.

The first is the government's taxing and spending and its deficits.

And the second on what sops and subsidies have been given.

This is, of course, what the Budget is for and it is what is expected.

The curious thing is that the economy does not appear to be a relevant subject in India's political debate.

It is not a part of the electoral debate.

We can go a step further and say that a lack of economic performance and inability to deliver growth does not harm the ruling party.

This is not a new phenomenon and we can observe that for decades we had low economic growth, what was called the 'Hindu rate of growth' under Nehru and Indira Gandhi, of about 3 per cent.

Despite this they and their parties remained popular and remained in office.

A related phenomenon is about jobs. India has, according to the government's own data, the lowest labour participation rate in South Asia and one of the lowest in the world.

This refers to those people over 15 who are working or looking for work.

In the United States, this rate is 60 per cent, in Thailand around 70 per cent and in China and Vietnam around 75 per cent.

In India it is 40 per cent, lower than Pakistan and even Afghanistan.

The theory is that people have stopped looking for jobs because they are impossible to find.

MNREGA is today 4 times the size it was in 2004 and yet demand for it is unmet because the government has no money.

Though fewer people are in the labour market, the number of the unemployed (those who are looking for work but cannot find it) reached a record of 6 per cent in 2018 according to the government and has not fallen below this rate since.

This problem of jobs has gone along with the softening of the economy.

Once again, we only need to see the government's own data here also.

GDP growth began to decline from January 2018 and fell sequentially for 2 years and 3 months before the pandemic.

And then the pandemic produced a recession. This year's high growth rate will only take us back to where we were two years ago.

Taken together, we can see that India's economy and its capacity to give its people work has been in trouble for a long time.

But this is not a part of our political debate and there is no pressure on the ruling party to defend its record on this front.

It also appears that it is not easy for the Opposition to mobilise people around these two issues of economic failure and mass unemployment.

The mobilisation that has happened on this was spontaneous, such as the Patidar andolan for jobs a few years ago and what is currently happening with Railways recruitment in Uttar Pradesh and Bihar.

The Opposition wants to take the debate away from Hindu-Muslim and such things towards the economy and jobs, but is unable to.

The question is why. One answer could be, as Ravish Kumar the news anchor has suggested, that the media chooses not to cover these issues.

He has said that if the media would focus on jobs for two weeks in a row, the government would give in to the demands of those on the street.

Perhaps this is so. But in today's era, with social media, one does not require the mainstream media to the extent one did 15 years ago and so it is unlikely that this is being kept suppressed by a lack of attention from the media.

The answer to the question appears to lie in something deeper.

It seems that broad issues such as the economy's health and competent management and the ability of the government to produce an environment where jobs are available are not of particular concern to us as voters.

If important, they are less so than other things, like more temples and stopping young women wearing hijab from entering college as we are doing in Karnataka, and more statues.

When some of us who are directly affected by this economic crisis are mobilised as happened under Hardik Patel in Gujarat or as is happening for the railway recruitment now, then there is some activity on the ground.

But for the most part our popular politics appears to exclude issues that are crucial in many other democracies, especially those of the west.

Things that make or break leaders and parties and which are the constant subject of daily debate and concern are not of importance in our India.

We can reflect on what that means about us as voters and us as a nation, and also, if this continues, where we will find ourselves as we enter the Amritkaal of our democracy.