'Perhaps GST was too complex a system for the Indian economy at its present stage of development,' argues T N Ninan.
Illustration: Dominic Xavier/Rediff.com 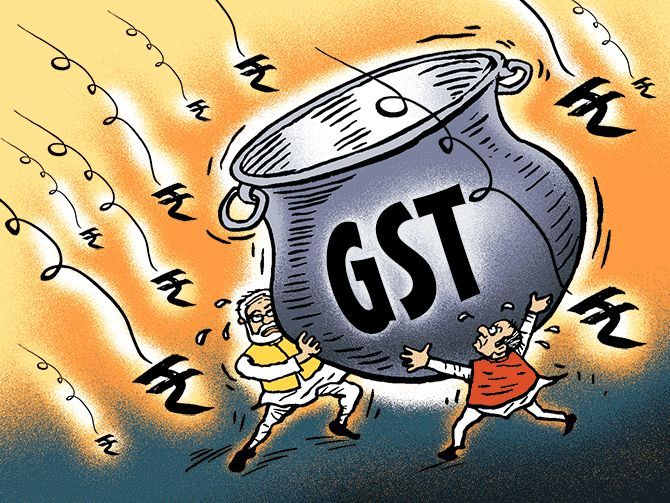 The Modi government has rolled out an ambitious spending programme for building the transport infrastructure and the provision of various goods of value to ordinary citizens.

The problem has been arranging the money to pay for it all.

One of the key assumptions was that the introduction of goods and services tax would raise the share of indirect taxes in gross domestic product and provide the wherewithal.

It hasn't worked out that way.

Central revenue from GST may be anything up to 40% short of target this year, and the states are now complaining about non-receipt of their GST share.

Pushed to the wall, the government is busy finding ways to pay its bills indirectly, or not pay at all.

The comptroller and auditor general has reported that the actual central deficit is more than 2 percentage points higher than officially stated.

There were four mistakes made on GST.

First, the political leadership did not realise until quite late in the day that GST is essentially a flat tax, with variations.

So all the goods consumed by the poor, and broadly enjoying favourable tax treatment, would now attract a higher tax.

Equally, the goods consumed by the wealthy would attract a lower tax.

So the poor would end up paying more, and the rich correspondingly less, if the GST rate were revenue-neutral.

That led to the first mistake: Going political, and introducing extreme progressivity in GST rates (all the way from zero to 28%).

This was GST without the logic of GST.

The second mistake was to promise the states a guaranteed 14% increase in GST revenue from one year to the next.

This, when a new monetary policy framework was being put in place for the Reserve Bank, with a target inflation rate of 4% (with 2 percentage point variation on either side).

What this meant was that an economy growing at 7% would ordinarily be expected to deliver nominal growth (including inflation) of about 11% -- well short of the 14% revenue buoyancy promised to states.

The compensation cess was available to help bridge the gap, but only for five years.

The third mistake was to keep key goods outside the scope of GST (petroleum products, tobacco, liquor).

Since these have usually accounted for the bulk of excise revenue, it affected calculations on what a revenue-neutral GST rate might be.

The fourth mistake was the drive by the Modi government to lower the cost of goods in the run-up to the general election.

So we now have companies claiming refunds of taxes on inputs that are more than the GST they pay on their final produce!

Meanwhile, in the implementation phase, we have seen a repeat of what happened in the wake of the demonetisation three years ago: People found all kinds of creative ways to turn black into white.

In the case of GST, we seem to have spawned a fake-bill industry that provides convenient bills to producers, even as chunks of the production chain seem to have found a way to escape the GST net.

The initial promise, that eventually bills would be matched as a way of preventing such fraud, will be put to the test in April; we will have to see if it is do-able or just causes chaos.

If it does not work, it will have belied one of the central promises of GST, that it would address tax evasion and raise the tax share of GDP.

Even if invoice-matching proves successful, there are other elements of the system that are broken.

Perhaps GST was too complex a system for the Indian economy at its present stage of development.

Regardless, the Centre has to break heads in the GST Council and work out new slabs and rates (the fewer the better) and make a fresh start.

No economy can afford to persist with a tax experiment that has failed.