'If India can only grow at 5%, why bother spending time on the country?' asks Akash Prakash.
Illustration: Uttam Ghosh/Rediff.com 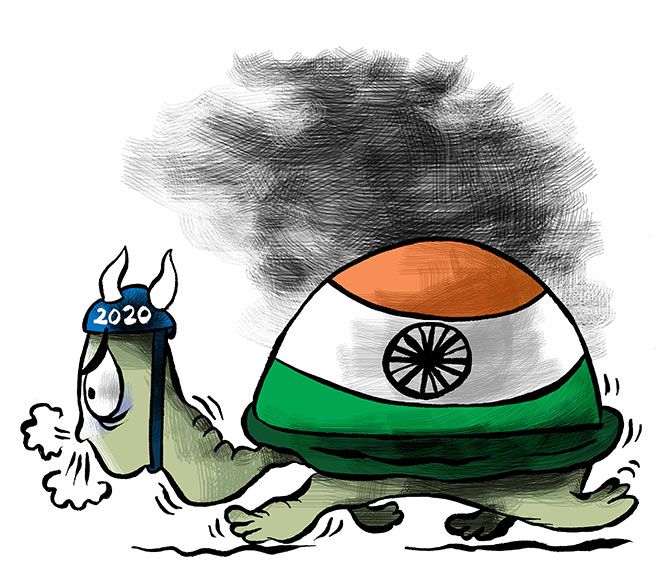 2019 was a tough one for active fund managers in India.

Market breadth was narrow, and though the indices showed gains of 5% to 7% in dollar terms, many India-specific funds were actually down for the year.

One allocator recently told me that she had never seen such a divergence in India funds performance before.

Large and well-known funds are at both ends of the spectrum, some up double digits, while others down an equal amount.

As we move into 2020, many have started questioning the long-term bull case for India.

Nobody expects India to deliver double-digit real GDP growth like China did, but is even 7% realistic, given our administrative and judicial constraints?

Global investors will be assessing what is India's real trend growth rate.

Is it only 5% to 6%, as some now suggest, or can the country come back to the old growth metric of near 8%? This makes a big difference to investors.

If India can only grow at 5%, why bother spending time on the country?

At 5% real GDP, we will be at 9% nominal, and the bears can argue that will be the long-term growth rate in earnings as well.

Why bother with a country delivering only 9% to 10% earnings growth and trading at 18 times earnings? India only delivers a return on equity of 10% to 11%, so that is no solace either.

Yes, there are some great companies, but most are already priced for the greatness.

By this narrative, India is just not set up for high and sustained growth.

The global growth environment was benign and we had the tailwinds of prior reforms, but we will never come back to such high growth rates again.

At 5% GDP growth, one-third of India will take forever to start consuming.

Incremental penetration rates across categories and products will fall drastically.

You can build a case for nominal GDP near 13%, and profit growth for a few years of more than 20% (as profit share-to-GDP normalises).

With profit surge, the ROE will also rise.

For this earnings stream, investors are willing to pay up, for no other large market will deliver this in the coming five years.

In a growth challenged world, high growth and rising ROE are very valuable.

In this higher growth scenario, as the third of India starts consuming, sustainability and predictability of growth will also improve.

Investors will pay a premium for less volatile and more predictable growth.

Investors are still not sure whether this growth slowdown in India is cyclical or structural. Many will form a long-term view over the next 12 months.

The slowdown has already surprised everyone in terms of its duration and ferocity.

Depending on their conclusions on the slowdown and its cause, they will move their long-term allocations to the country.

In 2020, investors will also finally come to a view on the economic agenda and policy-making prowess of the Modi government.

The last five years have seen a series of shocks (demonetisation, goods and services tax, Insolvency and Bankruptcy Code, non-banking financial company crisis) and a general clean-up and deleveraging in corporate India.

This has to end at some point.

All the pain taken has to have some payoff.

Of course, there are leads and lags, but some benefits need to start becoming visible.

What does formalisation of the economy mean?

Why is it good for the country?

How can we have formalisation if corporate earnings go through their worst patch ever?

Does formalisation mean a wipeout of small scale enterprises as they cannot transition?

For those who doubt the importance of the economy to the political leadership, the coming year is critical.

How will the leadership tackle this serious slowdown? The next year will show the willingness of the Modi regime to undertake structural reforms.

We have a serious economic slowdown, if we don't do the heavy lifting on reforms now, then when will we do it?

There is a clear belief among global investors that this is India's best chance to move ahead on public sector bank reforms, administrative changes and making India a more predictable and hospitable business destination.

This government has the political power, an all powerful leader who in the past has been pro-growth and shown the willingness to take risks.

If this government cannot bring the bureaucracy to heel, can anyone else?

If we do not push ahead now, it is difficult to argue that we ever will.

This opportunity lost today will lead to a derating of the country, as investors will reduce the probability of India ever breaking out and delivering on the $5 trillion ambition.

People have to be willing to take risk again, for any investment or capital expenditure involves risk and the financial system has to support risk-taking.

Investors understand that the country is in a tough spot currently.

We don't have any fiscal space.

The government cannot spend its way out of this slowdown.

With the Reserve Bank of India, seemingly conscious of headline inflation, even the monetary space is limited.

Ultimately, without an improvement in sentiment, we cannot really get out of this mess.

Sentiment will only improve with greater confidence, both among companies and consumers.

In 2020, I do expect non-US markets to outperform the US and the dollar to weaken.

It may be a positive backdrop for emerging market equities as global growth (especially non-US) strengthens, but liquidity conditions remain benign.

Given how poorly the broader Indian markets have done over the past 24 months, any return of positive sentiment and broadening of markets can lead to large gains, if we can only stabilise the ship and rebuild confidence.

We must give them more reason to do so.